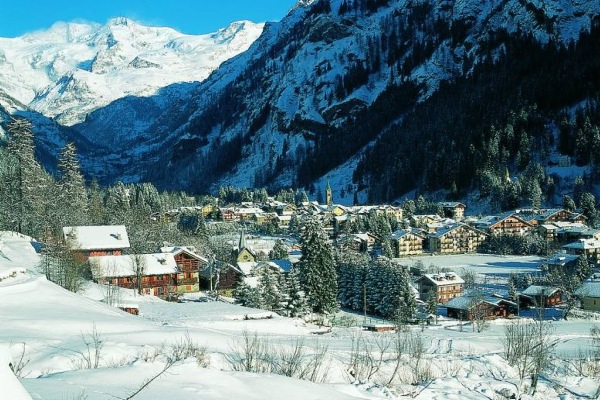 Gressoney is the centrally placed resort in the three-valley Monterosa ski area, and widely considered one of the most scenic in the Aosta valley. It's even quieter than Champoluc, and rather more attractive: a traditional, neat little village, with cobbled streets and wooden buildings.

The main lifts into the ski area are clustered around Stafal at the head of the valley, but there is a chairlift on the edge of Gressoney La Trinité itself. Even further down the valley in the other direction is Gressoney St Jean, which has its own small area of slopes.

The area suits intermediates who prefer long, undemanding cruises and don't mind repeating them. Experts come to the region for the splendid off-piste. The three-valley network of lifts and pistes is anything but small-scale. Champoluc at one end and Alagna at the other are 17km apart and it's around a four-hour trip by road if you miss the last lift.

The heart of the village is slightly away from the skiing, but there are skiers' satellites that have grown up at the lift bases. Across the valley 500m away, at the base station of a slow chairlift into the local slopes, is a mini-resort almost as big as the village proper. The lifts for the other valleys go from a second lift base at Stafal, 5km away at the head of the valley (linked by a free but infrequent bus). The resort is very laid back, with tranquil apres, set around local bars that line the cobbled streets.

Gressoney is pretty quiet. At Stafel, head for the bar under the Nordend (great for a teatime beer).

Off the slopes there's an ice rink, a sports hall and a large pool

Well worth a visit for those tired of the busy pistes and long queues of some of the high French "Ski Factories" during school holidays.

Hotel Dufour is a great little family-run hotel. There’s only 32 rooms so you really do feel like you’re at home when you stay here. It’s a got a charming...

Hotel Lo Scioattolo has a fab location in the centre of Gressoney and fantastic views of the Aosta Valley. As soon as you arrive, the team here will make you feel at...