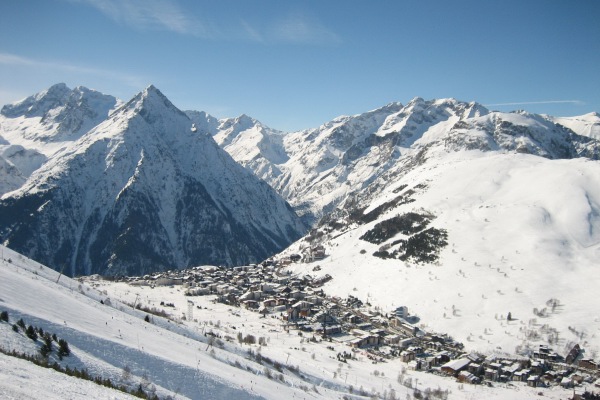 Les Deux Alpes is a busy lively town that has grown along the valley floor during the last twenty years. It is a long way from one end to the other and it is served by the village chair at the beginning of the resort, the Jandri Express in the centre, and the Diable Telecabines at the Venosc end of the resort. The ski area is big with 205 kms of pisted runs on the map and a huge off piste terrain.

A previous complaint was of the of lack of variety of runs coming back into the resort which led to bottlencks at busy times. Where once there was just a black run down and a flat meandering green, now they have constructed a series of blue runs so all abilities are catered for.

Beginners will love the nursery slopes along the valley floor close to many of the accommodations. There are also a lot of great beginners blue and green runs at the top of the resort on the glacier. Now the addition of blues has massively improved the situation for beginners.

Intermediates will love some of the fast cruising runs especially the runs down from the Glacier du Mont de Lans to Toura and then on to Cretes.

Experts are well catered for in Les Deux Alpes and the Chalance black itinerary is a great run and not as daunting as it looks from the bottom. Off piste in the area when acccompanied by a local guide can be really fulfilling, the famous La Grave network is easily accessed from Les Deux Alpes and this is one of the world's most renowned off piste meccas.

For Snowboarders Les Deux Alpes is a must go to place with one of the largest and most interesting terrain parks in the Alps. The resort is ideally suited with very few flats and even fewer drag lifts.

The lift pass in Les Deux Alpes offers 2 days skiing in the nearby resorts of Serre Chevalier and Alpe d'Huez with buses running twice a week. However a better option would be to splash out €85 and take the helicopter.

Apres ski in Les Deux Alpes has a reputation for being lively and fun and last time we were there Smithy's Tavern and Cafe Bressilien were rocking.

Les Deux Alpes is a very lively resort with plenty going on. The town is spread along a road lined with shops, bars and restaurants. There is a free shuttle bus that removes the inconvenience if you find yourself situated at the wrong end of resort. A trip down on the gondola to the old farming village of Venosc makes for a scenic interlude, and there are helicopter rides over to Alpe d’Huez for an alternative diversion.

The nightlife is legendary with live music at Smithys, O'Brians, and Cafe Brasilien. The umbrella bar, Slide Planet, and De Prins Van Oranje all get a lot of praise. Bowling at Le Strike and many more bars such as Marjolaine, Bar Vie, Tribecca, monkey Schuss, and K.re Bar.

Vibrant resort centre with good snowmaking facilities and a glacier to ensure good conditions throughout the season. Good resort for mixed abilities and families.

Newly opened in December 2021, Residence Les Clarines is a brand new building offering spacious apartments and called a Residence Club due to the extra facilities offered. It has skiing...

Hotel Base Camp Lodge is in a great location at the end of the main street in Les 2 Alpes resort centre. Also being just a few minutes walk from the ski...

Belambra’s new Hotel Les Deux Alpes 1800 offers good quality accommodation at the foot of the slopes with direct access to the Village ski lift. The ease of skiing makes...

Village Club du Soleil is coming to Les 2 Alpes this winter! A fantastic ski-in/ski-out property, meals are all-you-can-eat buffet-style (including wine!) and there are a range of children’s clubs...

Situated at the entrance to Les Deux Alpes, and with a variety of shops, bars, a supermarket and ski lifts within the vicinity, these two luxury ski apartment residences have...

Located in the Belle Etoile area at the entrance to Les Deux Alpes, the many residences of this complex have an excellent slope-side location some allowing ski-in/ski-out. Being only 200...

Situated adjacent to the slopes and just 5 minutes’ walk to the resort centre, the Alpina Lodge holds a commanding location for a ski holiday in Les Deux Alpes. The...

Hotel Souleil’Or is located in the peaceful L'Alpe de Mont-De-Lans area of Les Deux Alpes, in the heart of an exceptional ski area. Positioned at the foot of the beginner...

The Hotel Ibiza is focused on high-altitude entertainment and enjoyment. The building sits in the heart of Les Deux Alpes ski domain – just a short walk from the nearest...

These fantastic apartments are in a superb position at the foot of the pistes with an indoor pool and leisure facilities. Built in a traditional mountain style, each apartment is...