And it’s snowing!!! Again! After a somewhat barren December which left us all fearing the worst, the snow gods have looked down on us once more. Just when the pistes were starting to look bare with stones showing through the snow arrived as forecast with between 15 and 20cms falling overnight Monday, perfect timing for my day off on Tuesday. And it didn’t stop there. It snowed lightly throughout Tuesday ready for a Bluebird powder day yesterday as whoops of joy could be heard around resort yesterday as all the tour operator staff enjoyed their day off. 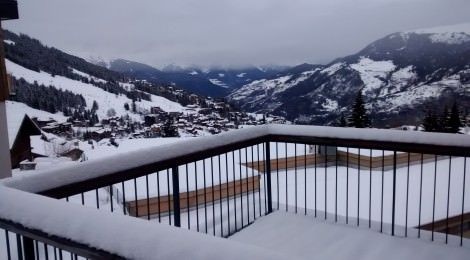 So what does this mean for conditions? Well the pistes are soft and covered once more blanketing those nasty icy patches which were far too common last week. I didn’t venture as far as La Tania which has certainly fared the worst in recent weeks but over in 1650 and 1850 the snow has helped no end. If you’re not a powder fan this week may well have been tricky with deep chopped up snow on piste but once that’s bashed down at night we all reap the benefits.

This week also saw many experiencing their first foray into the deep stuff this season as people are starting to venture off piste. The precarious and much talked about situation off piste this season has stabilised a little after the warmer temperatures last week. This isn’t to stay its safe but certainly a little less hazardous. Steeper sun affected pistes should still be avoided and be sure to carry avalanche safety gear and know how to use it if you plan on venturing off piste. Despite the heavy snow this week the snow pack is still thin so we stayed in areas we knew to be grassy underfoot to avoid hitting any rocks. And although you can feel the base at parts it was an awesome day which reminded us all why we’re here. Although my form left a lot to be desired. With sore toes I’m sure I spent most of the day back seat as I struggled to remember the technique which I employed almost daily last season.

Looking ahead, its snowing lightly this morning and its expected to snow throughout the day. And if you check out this forecast courtesy of SNOW FORECAST the future is looking very bright.